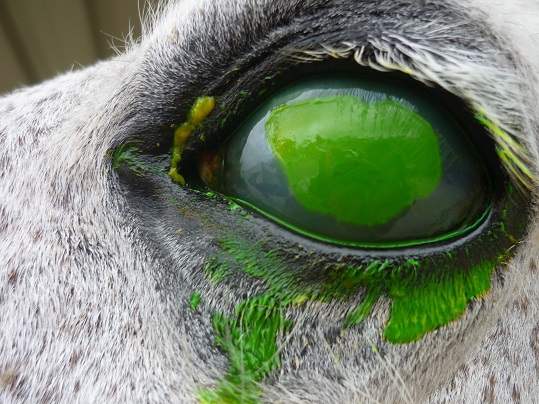 The cornea is a dome-shaped structure located in the front of the eye, hemispherical, transparent turn formed by three layers, whose function is to allow the passage of light and protect the iris and the lens. In the horse it has a thickness of 0.8 mm. It is one of the few that is not vascularized tissue (it has no blood vessels), but ifinnervated (has sensitivity).

Among the possible diseases that may suffer the cornea of a horse is the most common corneal ulcer.
A corneal ulcer is a tear in the cornea, usually caused as a result of a wound or infection caused by bacteria, fungi, viruses. These can be superficial or deep.

A corneal ulcer is an emergency? yes  it is an emergency and the reasons have been named before:
• it is avascular (has no blood vessels) so defense mechanisms are decreased compared to other tissues.
• is exposed to environmental contamination, as well as fungi, bacteria or viruses that can complicate the initial process.
• And because because its thickness is no more than 1 mm a superficial initial process can be transformed into a deep ulcer in short time.

How to recognize an ulcer
– Pain: our horse can squint, presenting photophobia, lacrimation, reluctance to keep the eye open completely, you can rub the affected eye. (The degree of pain is not directly proportional to the severity of the problem).
– Redness and swelling of the conjunctiva between the eyelids and covering the sclera and the third eyelid.
– Turbidity of the cornea (presented whitish) as a result of edema or cellular infiltrate.
Worsening symptoms of injury
– Any increase in edema ( it becomes whiter)
– Alteration of the contour.
– Changing the color: