What is West Nile fever? 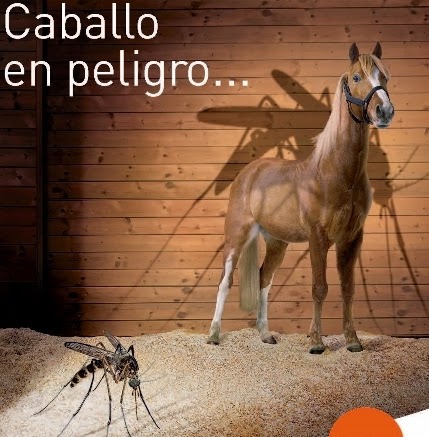 What is West Nile fever?

West Nile fever is a disease caused by West Nile virus.
It causes disease in humans, in horses and some birds. Most patients present few clinical signs, but some develop severe neurological disease that can be fatal.
The West Nile virus has an extremely wide range of hosts.
It replicates in birds, reptiles, mammals, mosquitoes and ticks.
West Nile fever is a disease registered in the Health Code
Terrestrial Animals of the World Organisation for Animal Health (OIE) and is
notifiable.

Where is the disease?
The West Nile virus was first isolated in Uganda in 1937, and in 1951 was described as the cause of the epidemic of West Nile fever in humans in Israel.
In August 1999, the disease first appeared in the Western Hemisphere,
probably due to the importation of an infected bird, and killed wild birds and zoo, horses and humans in the area of the city of New York. In less than 10 years it spread across North America, including Mexico and Canada, and reached South America. Since 1998, outbreaks have been reported equine encephalitis due to West Nile virus in Italy, France and North America. Surveys in parts of Europe and the Middle East have shown that a third of the horses undergoing testing have been exposed to the virus without submitting the clinical disease.
The following link shows the last officially reported cases; http://rasve.magrama.es/RASVE_2008/Publica/Focos/UltimosFocos/UltimosNac.aspx

How is the disease transmitted and spread?
Birds are the reservoir of the virus. When a mosquito bites an infected bird, becomes in turn ingested infection and virus. Mosquitoes then act as carriers (vectors) spreading the virus of bird to bird or other animals.
What are the clinical signs of the disease?
West Nile fever is a disease that mainly affects humans, horses and some birds.
In horses, clinical signs of neurological disease caused by West Nile virus may include:
 Loss of appetite
 Depression
 Tropezones
 muscle contraction
 Partial paralysis
 Fever
 Decreased vision
 Pressure head
 chattering teeth
 March confusing
 Seizures
 around in circles and inability to swallow
 Weakness usually in the hind limbs, sometimes is followed by paralysis.
 coma and death can occur.

There are no specific treatments for the disease other than supportive therapy.
Most animals recover spontaneously.
How is the disease diagnosed?
The clinical symptoms described above are an indication of West Nile fever. The diagnosis is confirmed by detecting antibodies in the blood of animals.
What is done to prevent or control this disease?
West Nile fever is a company registered in the OIE listed disease and whose statement
It is mandatory for member countries.
To prevent the spread of disease is essential to control the mosquito population, avoid exposure to mosquitoes especially at dusk
and dawn when they are most active, special blankets and insect repellent and limit mosquito breeding sites.
There is a vaccine for horses. In areas where the disease is common, vaccination of horses is not considered effective but it is one more tool.
What are the risks of this disease to public health?
West Nile fever is a zoonosis (an animal disease affecting humans).
Humans are susceptible to the disease, but most often without symptoms. About 20% experience similar to mild flu-like fever, headache, erythema symptoms. In rare cases, it can cause encephalitis. However, less than 1% of infected people will develop severe symptoms. In 2007 in the US, 121 people died from West Nile fever.